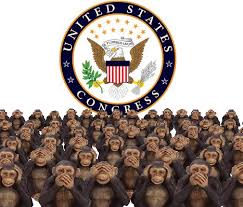 It is a part of the human condition that many people in the face of overwhelming truth supported by conclusive factual evidence will for no practical reason side with the opposition. There are many reasons for this, including false beliefs based on religious dogma, simple mean-spirited contrariness, sheer ignorance, or as too often the case, defaulting to powers greater than themselves who hold the purse strings that rule their lives. In the case of United States Congressional Climate Change deniers, the latter reason is not only short-sighted, but tantamount to misrepresentation of the people who put them into office in the first place.

The chief climate change denier in Congress is Sen. James Inhofe. Longtime member of the Senate environmental committee, Inhofe has been more than a little vocal in his denunciation of the facts behind the climate change debate. He is the author of The Greatest Hoax: How the Global Warming Conspiracy Threatens Your Future and is the commander in chief of disinformation on the topic.

Today, Inhofe doubled down on his dubious denier in chief position as reported by Phil Plait on slate.com in an article titled James Inhofe Slammed on Global Warming. Plait notes:

” Sen. James Inhofe (R-Okla.) is more than just a global warming denier. He’s a conspiracy theorist (calling warming a “hoax”) and, shockingly, (he is) hugely funded by the oil industry. Reading things he’s said about global warming is like perusing a denier’s playbook of nonsense.

So this story comes as no surprise to me, even as it elicits a long sigh: Sen. Amy Klobuchar (D-Minn.) submitted a resolution simply acknowledging that global warming exists and poses a threat to the interests of the United States—which it does, on both counts.

Of course Inhofe blocked it.”

Most people who understand that science trumps demagoguery are hard pressed to take actions and statements like Inhofe’s lying down, especially if they are United States senators with the best interest of the nation at heart. This, however, is far from the first time Inhofe’s statements have been seen as controversial. A very informative website, Skeptical Science: getting skeptical about global warming skepticism, details just how off the mark on this issue Inhofe and his ilk are in mainstream society and in the scientific world.

However, possibly the best response to Inhofe’s blockage of the Klobuchar Resolution was from fellow senator, Sheldon Whitehouse (D-RI). Whitehouse takes on Inhofe’s main talking points and adds his own slap down of the misinformed senator from Oklahoma as reported in a Think Progress dispatch. Whitehouse is at the height of his rhetorical condemnation when in response to Inhofe’s false claim that the government is “colluding” with climate change supporters to push their own agenda. Whitehouse owns Inhofe by listing the organizations that support science over Inhofe’s preposterous assertions. Plait writes:

“Next, Whitehouse took on Inhofe’s assertion that federal government agencies — The Department of Defense, NASA, and NOAA, for example — were colluding to promote environmentalists’ agendas. “Colluding together. That’s a fairly tough word to use,” he began.

Whitehouse: Let me tell you some of the government agencies who are so-called colluding together. How about NASA? We trust them to send our astronauts into space. We trust them to deliver a rover the size of an S.U.V. to the surface of Mars safely and drive it around, sending data and pictures back from Mars to us. You think these people know what they’re talking about? … How about the United States Navy? The commander in chief of our Pacific Command? Is he colluding when he says that? …

If you want to ignore the federal government, if you live in a world in which you think the federal government colludes with itself to make up things that aren’t true, okay. But look at the property casualty insurance and reinsurance industry. They’re the people with the biggest bet on this. They have billions of dollars riding on getting it right, and they say climate change is real, carbon pollution is causing it, we’ve got to do something about it. So does the U.S. Conference of Catholic Bishops, because they care about the poor and the effect this will have on the people who have the least. So does every major U.S. scientific society. Every single one.” (This info is also included in the accompanying video supplied by Think Progress)

The 800-pound gorilla in the Climate Change debate living room Inhofe and his fellow deniers hope the public will ignore is who is behind the funding for governmental officials and gadflies who support this scientifically untenable position. In an article published on Dec 23, 2013 by Douglas Fischer and The Daily Climate titled, “Dark Money” Funds Climate Change Denial Effort, Fischer explores a study by Drexel University which is both eye-opening and ominous:

“The study, by Drexel University environmental sociologist Robert Brulle, is the first academic effort to probe the organizational underpinnings and funding behind the climate denial movement.

It found that the amount of money flowing through third-party, pass-through foundations like Donors Trust and Donors Capital, whose funding cannot be traced, has risen dramatically over the past five years.

Meanwhile the traceable cash flow from more traditional sources, such as Koch Industries and ExxonMobil, has disappeared.

The study was published . . . in the journal Climatic Change.”

The “going dark” of funds supplied by political action committees is a strategic shift from years in the past. The known contributors to the climate denier positon from years past reads like a whos who of conservative organizations.

“According to Brulle, the largest and most consistent funders where a number of conservative foundations promoting “ultra-free-market ideas” in many realms, among them the Searle Freedom Trust, the John Williams Pope Foundation, the Howard Charitable Foundation and the Sarah Scaife Foundation.

Another key finding: From 2003 to 2007, Koch Affiliated Foundations and the ExxonMobil Foundation were “heavily involved” in funding climate change denial efforts. But Exxon hasn’t made a publically traceable contribution since 2008, and Koch’s efforts dramatically declined, Brulle said.”

The upshot is that big energy and ultra-conservative groups have a vested interest in promoting climate change denial and are not averse to lining the campaign coffers of congressional campaigns if the senators and representatives will take up the cause. An example is Inhofe’s own track record of funding which can be found at OpenSecrets.org (link reprinted from above).

I am reminded of a line from Shakespeare’s Hamlet: “The lady doth protest too much, methinks.” Or in this case, the not so honorable Senator James Inhofe.

One thought on “Living Large in Carson City: Head in the Sand Edition”