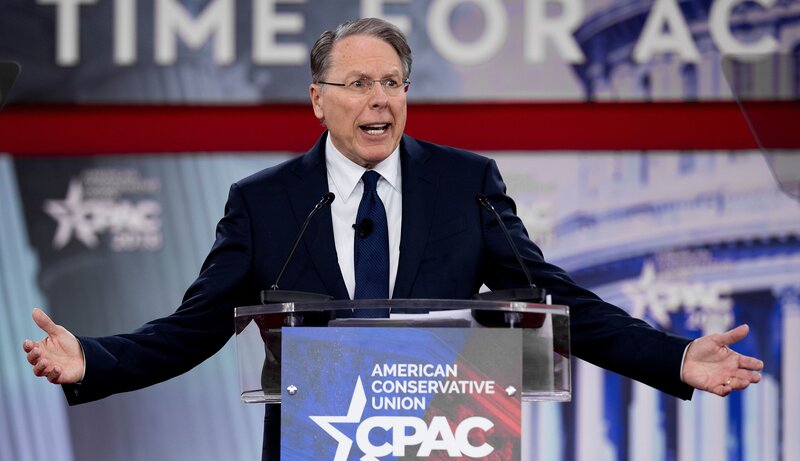 Trying to listen to the Wayne LaPierre speech delivered on 2/22/2018 at the Conservative Political Action Conference is an exercise in futility, pain and exasperation. Add to that incredulity, “no, he didn’t say that” moments, lies and outright mean-spirited propaganda and readers will get a sense of the idiocy that grips the conservatives of America and the Republican Party. It is frightening to hear LaPierre, NRA national spokeswoman Dana Loesch Youtube start .39, and “Grand Pa Munster”, Ted Cruz R Texas, opine about how liberals, European socialists and the “elite” (whoever that might be) are the real reasons for mass shootings.

Listening to LaPierre rant about European socialists, arming school teachers, and failure of security and the nuclear family is akin to listening Joe McCarty on steroids. He attacked just about everyone not associated with the far-right conservatism that has become the banner of the NRA and gun nuts everywhere. But LaPierre was not there to just promote gun rights; no, he was there to sound the false claim that the American government, the Democratic party, socialist (read non-conservatives), and oddly enough, the American “elite” are out to destroy America. To listen to LaPierre, the “elites” are coming to, not only take guns away from hard working American citizens, but they don’t give a damn about the 2nd Amendment, individual freedoms, national security or school children. At one point early on in the speech, he states,

In the midst of genuine grief, and a very understandable passion as millions of Americans searched for meaningful solutions, what do we find? Chris Murphy, Nancy Pelosi, and more, cheered on by the national media, eager to blame the NRA and call for even more government control. They hate the NRA. They hate the Second Amendment. They hate individual freedom. In the rush of calls for more government, they have also revealed their true selves. The elites do not care about America’s schoolchildren. If they truly cared, they would protect them. For them, it is not a safety issue. It is a political issue. They care more about control and more of it. Their goal is to eliminate the Second Amendment and our firearms freedoms, so they can eradicate all individual freedoms. What they want are more restrictions on the law-abiding. Think about that. Their solution is to make you, all of you, less free. They want to sweep right under the carpet the failure of a school security, the failure of family, the failure of America’s mental health system, and even the unbelievable failure of the FBI.

This is line of reasoning runs throughout the speech, which sets up a disconnect to what is really the reality of the American social and political system. In the very beginning of the speech, he trolls American “opportunists” who quickly called for stricter gun regulation.  Without a beat, he segues to an attack on conservative’s favorite punching bag in the form of “the father of modern community organizing”, Saul Alinksy. LaPierre didn’t miss a beat as he then took on one of the main themes of the day, the American national press, and their culpability in its destruction of everything from family values, the NRA and the very fabric of the American democracy.

The reference to American “elites” was the most curious attack of many such attacks during his speech. Anyone above ground and living in America today understands that the elites of this country are the backbone of the Trump administration. From the numerous Wall Street graduates from Goldman Sachs who serve in Trump’s cabinet to wealthy family members like Secretary of Education, Betsy DeVos and her brother and Trump confidant, Erik Prince founder of Blackwater USA, and of course, the Trump extended family who hold themselves above the average American toiling away in the middle and lower class trenches. To say his speech was surreal is an understatement.

Sadly for our democracy, LaPierre’s unhinged attack on anyone who disagrees with him and the NRA is far more frightening than just about any enemy of the American democratic system afoot today. It is a bit ironic that his charges against America’s elite (i.e. read non-wacko conservatives) sounds like he is attacking Trump and the Republican Party. Consider where he was going with this:

And anyone who attempts to resist is smeared right into submission. Yep. You know it.  Yes, the art of the smear. We live in the socialistic age of the art of the smear. It does not have to be true. It just has to stick somewhere, anywhere. It is designed to degrade, destroy, and it is all over the national media to serve their agenda. And socialism is a movement that loves the smear. racist, misogynist, sexist, xenophobe, and more. These are the weapons and vitriol these character assassinations scream to permanently hang on their targets and create a growing segment of victims. Because socialism feeds off manipulated victims. You name the group, and they will find a way to turn them into victims. They keep their movement growing by finding someone to be offended by something every minute of every day. From the Occupy Movement, to Black Lives Matter, to Antifa, they agitate the offended, promote uncivil discourse, and ignore any sense of due process and fairness to destroy their enemies. The elimination of due process is the very gold standard of the socialist state.

Honestly, the same themes are repeated over and over again. It is a rallying call for the NRA and those disaffected Americans who see their lifestyle and grip on the American way of life slipping away. America is changing. One thing remains evident, especially in light of the text of this speech: the NRA and Wayne LaPierre want only one thing . . . to sell more guns. It has nothing to do with patriotism or internal threats to our democracy. Arming teachers to make classrooms safe and secure is a NRA false flag. Simply put, LaPierre is a salesman pure and simple. This speech proves that fear and disaffected people can be sold a line of bullshit if it is wrapped in a thin veneer of hate and us against them verbiage. If LaPierre can make his audience feel like self-righteous patriots, all is right in his world.

One thought on “Living Large in Carson City: Elites, the Media and Democrats Will Eat Your Children Edition”