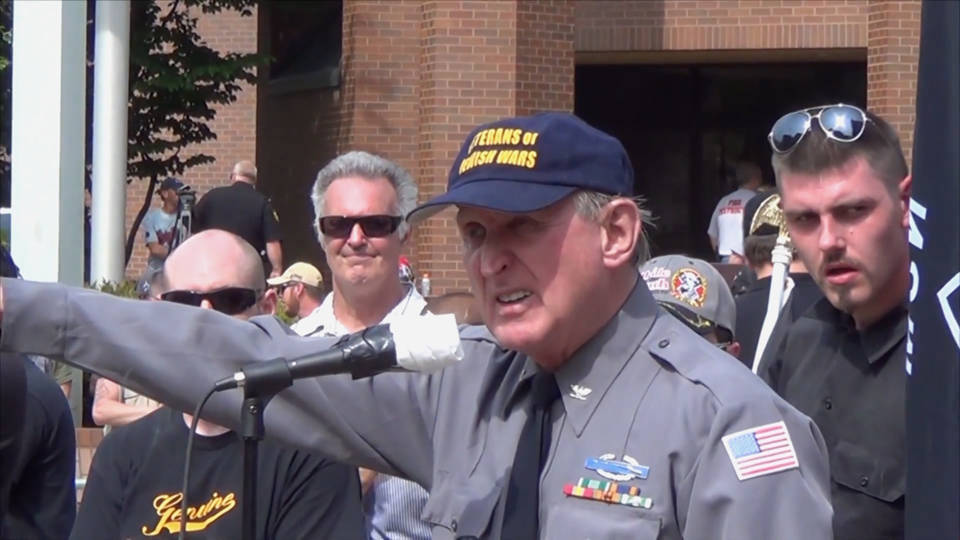 “We have become a Nazi monster in the eyes of the whole world—bullies and bastards who would rather kill than live peacefully. We are not just Whores for power and oil, but killer whores with hate and fear in our hearts.”

― Hunter S. Thompson, Kingdom of Fear: Loathsome Secrets of a Star-Crossed Child in the Final Days of the American Century

The above image is of Arthur Jones. Who is Arthur Jones you may ask? In the grand scheme of things no one and a lot. Born in 1948, he is a Baby Boomer. He served in Vietnam. He has been in politics most of his adult life but as unsuccessful “all so ran”. Today, Jones’ luck changed. He just won the won the Illinois Republican primary in the 3rd Congressional District Tuesday. More importantly, there is this:

In full-closure, Jones ran unopposed on the Republican ticket in a traditionally Democrat district which includes part of Chicago, hence the lack of a viable opponent. The Republicans knew there was no way of beating the sitting democrat, so why bother. In steps Jones and usurps the Republican mantle, which forced the Illinois Republicans to publicly distance themselves from his candidacy. In fact, there were many who stepped up to disavow the Jones candidacy.

Jones’ Nazi-sympathies were not a secret going into election day. His campaign website features a slideshow of pictures of him speaking at white nationalist events. He is a perennial candidate who has previously run for U.S. House, Chicago alderman, and mayor of Chicago, and even mayor of Milwaukee. Chicago media extensively covered the race. The Anti-Defamation League warned voters of his record. The chairman of Illinois Republican Party even disavowed him, saying “The Illinois Republican Party and our country have no place for Nazis like Arthur Jones. We strongly oppose his racist views and his candidacy for any public office, including the 3rd Congressional District.” Think Progress

So, everyone hates this guy and thinks he is a terrible candidate to run for Congress, regardless of one’s political affiliation. Case closed if politics operated in a vacuum. Funny how the electorate has a way of messing up otherwise tried and true acts of political acumen.

On Tuesday, despite his vocal Holocaust denial, his anti-Semitic rhetoric, and his white supremacist views, 20,339 Illinois Republicans, according to preliminary totals, cast their ballots for Arthur Jones . . . While the National Republican Congressional Committee, the campaign arm of the House GOP, dismissed Jones last month as “a fringe candidate who has been doing this for over a decade with no real connection to the GOP,” his campaign platform mirrors President Trump’s agenda (emphasis added). Jones’ campaign website promises to “put America first” with border protections, the elimination of “Sanctuary Cities”, no “amnesty for illegal aliens,” gun rights, and a repeal of the Affordable Care Act.  Think Progress

With that tidbit of trivia, Jones leaves the world of shadows and gains a healthy dose of gravitas from his fellow 3rd District electorate. Think of the implications. An avowed Nazi, white supremacist, crackpot and Trump supporter garnered over 20,000 votes from Republicans. It’s not like they didn’t have another choice ideologically. Seven term Democratic Congressional Representative Daniel Lipinski from the 3rd District is a hardcore conservative who resembles a Republican without actually being one. He is virulently anti-choice, soft on LGBTQ legislation and a host of other far right stances, so he would appear to be a better choice than a Nazi. Not so, said 20,000 upright Illinois Republicans who voted for Jones.

Conventional wisdom would say, “Why worry?” Lipinski is expected to trash Jones in the general election, and Illinois politics will go back to business as usual. Yet, the implication of this ill-begotten political fiasco relates back to the optics it creates, and of course, the fact that 20,000 Republicans voted for an avowed Nazi and Holocaust denier.  I am not a Republican sympathizer in any manner, but Jones’ hateful ideology should rise above partisan political thinking and be replaced by a healthy dose of American patriotism and democratic solidarity. When people are so entrenched in their political stance that they are willing to sell democratic principles and American exceptionalism down the river to stand firm in their hate for the opposing party, America is in trouble.

Or is Thompson right? Are we “killer whores with hate and fear in our hearts”? Today, there are 20,000 reasons to think so.