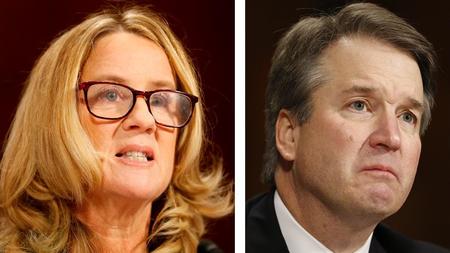 Yesterday was one of those days that will remain in our memories forever. Where were you when Nixon resigned? Where were you when the first man walked on the moon? Where were you when you heard that John Kennedy was dead? In the future we will add, where were you when the Senate Judiciary Committee chose to ignore a sexually assaulted woman in favor of her alleged assailant. A man who is a part of the “good ole’ boy” network that grooms the elite of Washington society for positions like the one Brett Kavanaugh is hoping to fill on the Supreme Court. It was that kind of day.

I confess to watching the entire circus from gavel to gavel. The first part, Christine Blasey Ford’s testimony, was a study in integrity and an important civics lesson. Integrity in that she had a narrative to tell, and she told it with humility and emotion, but not in a way that elicited undue sympathy (although I can’t believe anyone could watch her speaking without feeling sympathy). A study in civics because she knew what had been done to her and chose to tell the story, not for personal gain, but simply because it was the right thing to do. A sexual predator was on the shortlist for a seat on the Supreme Court, and she felt it was her civic duty to speak out, although reluctantly, to ensure that the Senate Judiciary Committee and the president had all the information pertinent to choosing a qualified subject.

Later in the day, things came apart when Kavanaugh took his seat at the witness table. His anger and incredulity of being put through such a rancorous and contentious grilling was evident in his 40-minute long opening remarks. Alternately, while bellowing out his objections to crying then back to bellowing then starting all over again, several points became very clear.

First, his belief in his accomplishments was huge. Granted, he has had a charmed life up until now attending a private high school, admission to Yale and then acceptance into Yale Law School, all of which he proudly chronicled over and over again. From there his grooming cycle took him to Ken Starr’s investigation of the Clintons, legal counsel in Bush’s White House then a federal circuit judgeship. And naturally, in his eyes, the Supreme Court was supposed to be his next stop. It’s the way the grooming process works.

His disdain for the process that would subject an anointed one such as himself to public scrutiny was palpable. When questioned, he fairly mocked the Democratic senators by throwing their questions back at them. This tactic didn’t work all that well on Senator Whitehouse (D-RI), and especially not on Senator Amy Klobuchar (D-Minn.), who Kavanaugh had to apologize to after making insensitive remarks about her drinking habits. As the daughter of a recovering alcoholic, Kavanaugh’s flippant hectoring of Klobuchar came off as brutish and bullying, which it was.

In the end, Senator Dick Durbin (D-IL) brought the session to a halt when he asked Kavanaugh to turn around and ask White House Counsel, Don McGahn, seated behind Kavanaugh, if he would ask the president to reopen the FBI file on Kavanaugh so the allegations brought against him by Blasey Ford could be investigated. Kavanaugh refused to commit to making the request.

The rest of the day was a mishmash of crazy on an epic scale. Having asked for an outside counsel to grill Blasey Ford and Kavanaugh, the senators abandoned that tactic to ask their own questions after Durbin put the nominee on the ropes. The questioning devolved almost immediately to a partisan, unhinged tirade by Lindsey Graham (R-SC) to a weird come to Jesus moment instigated by John Kennedy (R-LA) that looked like a cross between The Waltons and the horror movie Halloween with Kennedy starring in the role of Michael Meyers.

The one truth that came from these exchanges is that, truly, the Senate Judiciary Committee has become a partisan political body beholding to the White House and Donald Trump over the objections of the 10 politically neutered Democrats who sit on their hands and dream of better days. Kavanaugh in his opening remarks and subsequent testimony emerged as a hardcore ideologue who, in his mind, has paid his dues and deserves the right to sit on the highest court in the land for the rest of his life. The fact that he would steer the court hard to the right and rule through his ideological mindset was evident in his words and the support he expected from the Republicans who sit on the committee. The problem for Kavanaugh was that he thought the fix was in. It wasn’t. Not yet.

Last night the Republicans decided to push forward and vote on the Kavanaugh nomination Friday, which they did on a party line vote a few hours ago. The one outlier was Jeff Flake (R-AZ). Flake has been on the fence concerning the Kavanaugh nomination but agreed to vote to pass Kavanaugh on to a vote on the Senate floor if the committee agreed to postpone the final vote for one week so the FBI can look into the allegations against Kavanaugh by Blasey Ford. An hour ago, the Republican led committee agreed to the one week hiatus for the final vote.

So, what does this mean for Kavanaugh? On one hand, the investigation could exonerate him. While the FBI is one of the premiere law enforcement agencies in the world, the attack Blasey Ford claims took place occurred 30 plus years ago. It might be difficult to nail down any definitive conclusion on Kavanaugh’s guilt or innocence. Conversely, considering the secretive manner in which this nomination has been conducted, Kavanaugh might find himself in deep trouble if the FBI gets lucky and taps into a group of his old friends who are willing to talk about those days openly. If they find a collaborating witness who was at the party that night or if Mark Judge, Kavanaugh’s high school friend, talks candidly (he has already agreed to being questioned by the FBI) Kavanaugh may find himself in even more trouble.

Best case scenario, the FBI gets lucky and backs Blasey Ford’s accusations. Or Kavanaugh gets off the hook. It isn’t beyond reason to think that Americans may wake up next week and find that Kavanaguh has withdrawn his name for consideration. Why would he do this? If he knows that his past will come to light, he can gracefully back out citing the pressure on his wife and family and claim it just isn’t worth it. Or he may play it out and see what happens. Regardless, with what America knows now about Brett Kavanaugh, he has proven himself to be a respected jurist, but also a secretive, dissembler of the truth who should not be seated on the highest court in the land. Let the FBI find what they will.