“Patriot: the person who can holler the loudest without knowing what he is hollering about.” –Mark Twain

The problem with writing a blog during the age of Trump is not finding a topic to write about each week. No, the problem is deciding which issue is pressing enough to make me ignore the other 10 or 15 stories that are just as compelling. This happens week in and week out. Trump creates a fire storm of controversy wherever he is and whatever he does. Some incidents are so multi-faceted that three or four topics sprout out of one occasion. It’s a bit maddening and makes me wonder what will it be like if we ever get back to normal; whatever that is at this point.

Of course, Donald’s 51 tweets (sprinkled liberally with retweets from his vast catalog of put downs) this past weekend has to rate right at the top of the list of off-the-chart issues that needs scrutiny. Not so much that it is odd that Trump is tweeting . . . again . . . but just the volume and choice of topics is so damned unusual. While there is considerable speculation that some of the tweets may have been generated by his staff, there are enough Orange ones to keep anyone busy for a week or two trying to sort out where the man’s head is at, and why it’s there.

One theme that has carried over into the week proper is Trump’s bashing of George Conway, Kellyanne Conway’s outspoken husband and his attacks on the president. Trump wrote,

George Conway, often referred to as Mr. Kellyanne Conway by those who know him, is VERY jealous of his wife’s success & angry that I, with her help, didn’t give him the job he so desperately wanted. I barely know him but just take a look, a stone cold LOSER & husband from hell! FactBase Mar 20, ’19 @ 7:51 am

Over the past year, Conway has become increasingly critical of the president, often turning to Twitter to express his opinion about, among other things, Trump’s mental health and fitness to serve as president. This past weekend he posted this, 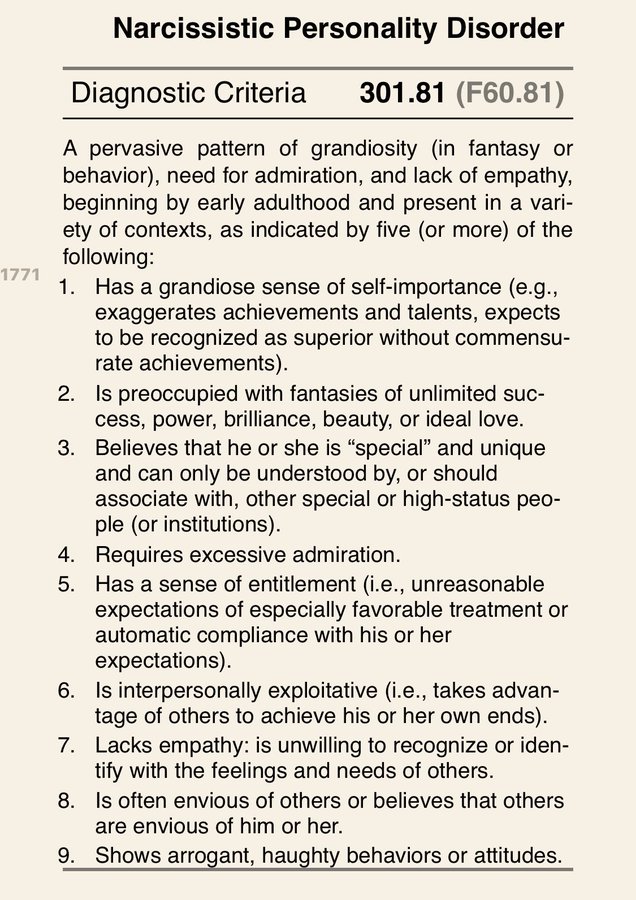 He posted a follow up tweet from the same manual on Antisocial Personality Disorder. Understandably, Trump took it badly.  Since then he and his staff have attacked George on a variety of fronts from being jealous of  Kellyanne to being miffed for not getting a job in the White House or the Justice Department and on and on. As of Wednesday, the president was still throwing barbs at Conway. Kellyanne for her part, predictably, sided with the president by expressing her views that run contrary to her husband’s stance. Trump continues to fume and act, well, like he has a Narcissistic Personality Disorder.

Don’t you love it when Trump calls out his opponents by citing behavior that he indulges in himself. One set of tweets followed this line of reasoning,

The Democrats are getting very “strange.” They now want to change the voting age to 16, abolish the Electoral College, and Increase significantly the number of Supreme Court Justices. Actually, you’ve got to win it at the Ballot Box!

Not a good situation! https://t.co/uaMcSrX4yM

….just the large States – the Cities would end up running the Country. Smaller States & the entire Midwest would end up losing all power – & we can’t let that happen. I used to like the idea of the Popular Vote, but now realize the Electoral College is far better for the U.S.A. Factbase

It’s probably safe to say two things. Trump calling anyone “strange” is laughable on the face of his comment. Second, he used to love the “popular vote” until he lost it in the 2016 election. Now that the shoe is on the other foot, not so much. Conway’s assertion that the president is a narcissistic personality plays neatly into Trump’s obsession of losing the popular vote in 2016. The man is incapable of self reflection to say nothing about understanding the role irony plays in his day to day life.

It’s not necessary to go through all 51 tweets and retweets but GM, John McCain, Megan McCain, more Democrat bashing, the United Auto Workers (UAW), CNN, and Fox News host Shephard Smith were all targets of Trump’s verbal gymnastics that ranged from slimy to downright nasty. If this man spent as much time governing as he does tweeting, his track record would be enhanced greatly above the locker room banter he is so wont to do.

As a footnote, it is worth noting the lack of Republican response to the tweets. Sure, some will lament the fact that the leader of their party spends an inordinate amount of time burning up the tweetosphere for no discernible reason.  However, most of them are silent on the juvenile tweets  bashing McCain, an American war hero, and stand silently by hoping against hope they don’t fall out of the Orange one’s good tidings and find themselves in a primary dog fight come 2020. To his credit, Mitt Romney was one of the ones with the Republican cojones big enough to call Trump out. A few others have followed suit, but not enough.

By now, it is clear that something is afoot in Trump’s little peanut brain. Something has him upset and worried to the point that he knows that distraction is his only outlet at this point. While the media obsesses over 51 tweets that have created a shit storm of attention by the press, other real and serious issues fall through the cracks. Why are we not debating Trump’s abortion of a budget that hikes military spending and includes money for the damn wall at the expense of social programs like Medicare and Social Security, science, education, and just about anything that supports the middle class? Or where is the outrage over Trump’s claims that his base includes the military, police, and bikers who might be tough on the Democrats if they aren’t careful? I won’t even get started on his fear of the Mueller probe findings, the Southern District of New York’s federal court’s probes into his business, revelations that Cohen’s emails have been under scrutiny since 2017, or new info regarding is dealings with Deutsche Bank including erroneously overstating his worth to secure loans. These are just off the top of my head. There are many more languishing out there in the black hole that is Trump’s life.

Some of you know I am fond of W. B. Yeats’ poem The Second Coming and its beginning. The poem opens with,

The question remains when and what will be the final tipping point for Trump and his presidency? When will his center stop holding? If his 51 tweets aren’t enough to make you wonder, you aren’t paying attention. As the president continues to exacerbate the divide between white supremacist and the rest of us continues, it’s only a matter of time before things take a sharp turn for the worst. His taunts and browbeating of the media, Democrats, and anyone else who can see he is an emperor without clothes escalates, the divide only widens. Unless right thinking Republicans take a stand against his hate and bigotry, things will only degenerate into more of the same. Stay tuned. It shouldn’t be long now.