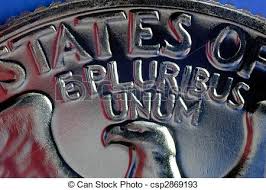 Out of Many, One

Were he alive today, my dad would have been a Trump supporter. While he was not a political animal, indeed, as far as I know, he never voted or cared for the political arena in any part of his life. He was, however, a lifelong Southern Baptist,  a deacon, somewhat of an evangelical and simply a hard-working man who was raised in the South and reflected all the good and bad things that go along with that equation for a man of his age. His support of Trump would not have been ideological, but rather, an emotional choice that would have come from frustration and the lure of a charlatan able to manipulate people through their fears, ignorance and distrust of the status quo.

To be clear, my dad was not a bad man. He was a beloved member of his community; a community that reflected his mindset, beliefs and an almost pathological compulsion not to make waves or call attention to himself. He minded his own business and expected others to do the same. His generation fought WWII and came home to a prosperous America that he loved and cared for deeply. That he held objectionable beliefs is an unfortunate whim of fate that affected most of the people from the south of his generation.

I mention this only to point out that many, if not a majority, of Trump supporters are very similar to my dad.  White, Christian, hard working and dedicated to  family and accepting of their station in life. My dad, like many Trump supporters, was also a racist, a bigot and frightened by the speed in which the world was changing around him. Those who were not raised in the south cannot understand the the social, economic and racial tension that is imparted to children from their parents. It was and is pervasive taking over one’s mental faculties and general outlook on how one lives their life.

The sixties blind sided my parents like it did so many others of their age and social background. To see his progeny flee the nest he so patiently and rigorously constructed over the years was both baffling and hurtful in ways I will never understand. I don’t think he  resented these turn of events, but rather, it shook him to his core, and in the end, confused him like nothing else had in his lifetime. He saw the country he fought for in World War II changing into a multi-cultured, radical world that was dismissive of so many things he held dear to his heart. The experience changed him like it did me. I have to say that it was not a change he would have chosen.

For all his faults, he followed his heart and his God, but being a white man raised and living all his life in rural East Texas, he was a segregationist at heart. With the Civil Rights Movement, he like others of his age felt the sting of change as an imposition on his right to carry on as he always had without the government telling him what to believe. Our first major confrontation of many was over race and the treatment of people of color with contempt and dismissal of their rights as Americans. He would have had no problem transferring that disdain to brown people, Asians or non-Christians.

Trump has figured this out and has made it his modus opernadi. Most of his supporters are good people albeit with leanings towards racism, bigotry, and a healthy dose of white privilege that is both corrosive and destructive to the American democratic way of life. Ultimately, they have become the worst kind of patsy. They have partaken of the snake oil and believe the man who is spoon feeding it to them. This feeds directly into Trump’s narcissistic personality and has become the drug that he too has now become addicted to like his followers. They have developed a symbiotic relationship based on fear of the “other” which colors their worlds in an us versus them mentality.

This is the crux of what I find so confusing and disheartening. Seeing people like my dad make choices that are not meant to solve the pressing issues facing America today, and contrary to their own best outcome, following a man who seems hell bent on destroying this great nation at the expense of those whom he cares little about in reality. Trump supporters see only the empty promise of reverting back to a time that has long ago become unworkable.

I loved my dad, but not his beliefs, and I am not writing to condone his or others’ anti-social ideas. When I see Trump supporters at his rallies, I see thousands of the proverbial, loud-mouthed uncles and aunts who are prone to making caustic and uncomfortable pronouncements at the family dinner table to the chagrin of their more enlightened relatives. My dad had a seat at that table, and at this point, I think it is hypocritical for me not to acknowledge this fact.

Unfortunately, there are also hard-core white supremacists, bigots and racists of another ilk  at Trump’s rallies. They are the ones America has to be concerned about in the end. Their beliefs about how America should be run are much more caustic and based in evil. Americans saw this at Charlottesville, VA last year and at other Unite the Right rallies across the country. This pandering to neo-Nazism, overt nationalism, white supremacy and just old fashion hatred for the world changing around them is at the center of what is most dangerous for America today.

My concerns inhabit many levels. First and foremost, we are headed for a reckoning that has been long in coming. As the demographics of the United States changes, people whose voices have long been suppressed on both sides of the equation are fed up and expect change to come in their favor. However, both sides cannot fully win in this controversy. In these over-heated times where an ego-driven enabler holds the most powerful seat in the country, it’s hard not to see dark times ahead. Yet, democracy demands an airing of grievances . . . to a point. The bottom line is the preservation of our republic.

How far either side takes offense over the loss that will surely come will determine how much the America my dad loved and fought for continues into the future. However, this is my country, too. For me, there is no going back to “better times”. In reality, this is possibly the best America we can hope for or deserve. I choose not to believe that is true.

In the end, our national motto, E pluribus unum, Out of many, one, defines who we are as a people. It has never had more relevance or appeal; nor has it ever been more in jeopardy as it is in America today.