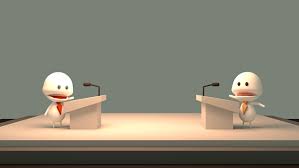 This past week (running through the weekend) I did something I swore not to do ever do again. It happened so suddenly I was knee deep into it before I knew it. Having sworn off more times than I care to admit, I engaged two deeply loyal Trump supporters on Facebook as to why I thought they were wrong in their beliefs. It was a tag team, wink and a nod offensive on their part, and honestly, I blame no one but myself.

Don’t get me wrong. I knew better from past skirmishes with other equally loyal fans of Trump, and it turned out no better.  From the beginning of Trump’s presidential campaign, I have been baffled how seemingly, normally intelligent people could fall for the charade that is Donald Trump. All one has to do is stay awake and marginally focused on what is going on in the country to see the dire straits America has fallen into at the hands of the Orange One.

Actually, I learned early on that engaging people who deny climate change, accommodate serial lying, cheating on their wives, and are literally clueless about governance at the federal level was a waste of everyone’s time. After all, if a person refuses to follow minimal standards of decorum in public office, there is not much of a chance that anything I say will change loyalists’ minds.

To my credit, my issue with the two gentlemen this past week was not to “change” their minds, but something much more specific. Both of them began their posts by dredging up the past sins of Barack Obama and Hillary Clinton. Obama did this. Hillary did that. They were never punished. Why? The simple answer to this is the rule of law. Had they overstepped too far and broken the law then there would have been consequences. Of course, one would have thought I poured gasoline on my two adversaries and set them on fire judging from their responses.

To me, it is maddening when Trump supporters constantly blame Obama and Hillary for the turmoil gripping America today. The very fabric of our nation is under siege from incompetence, greed, assumed privilege and the total disregard for how a nation should be run. I tried to make these point to my two fellow Facebook posters. They would have none of it. In their minds America is on the highway to greatness with a Trump firmly in the driver’s seat. The swamp is draining and people should be happy.

So, the question remains: Why? What would make a fairly large bloc of voters to disregard the lessons of their parents and history and simply embrace a man who is shaping up to be the worst American presidents on record. The answers are legion; none of which satisfy this black hole of a dilemma.

Here is one explanation,

As the social psychologist David Dunning wrote during the campaign, “Some voters, especially those facing significant distress in their life, might like some of what they hear from Trump, but they do not know enough to hold him accountable for the serious gaffes he makes.” In other words, it’s not that they forgave Trump for being wrong, but rather that they failed “to recognize those gaffes as missteps” in the first place. USAToday

I heard a speaker put it this way recently, “They are just too dumb to know what they know (or don’t know).” This statement makes me think of Hillary’s “basket of deplorables”. The assumption was  that die-hard Trump supporters were under educated, mostly white, and often as not, religious and highly pissed off for circumstances beyond their control. While that description might be true for some of Trump’s base, I don’t think it is a true representation of the vast majority of Trump’s most rabid troops. The two Trump supporters I engaged at the end of last week were intelligent, well-spoken (or written) and knew their talking points backwards and forwards.

The problem, however, is they were wrong on just about every topic. Like Trump, they are climate change deniers. Like Trump, they think Washington is a smoldering swamp that Trump has been preordained to drain. They seemed to fall lockstep into all of the bad things that Trump supporters hold true and dear to someone like me. On the big issues like guns, global safety concerns, diplomatic integrity and a what it really means to put America first, there is no denying that these are issues that divide the vast majority of Americans. Yet, there is more there.

Empathy towards others does not seem to have much meaning for many of Trump’s base. They have become so attached to their monetary and material possessions (or lack thereof) that human life and dignity mean nothing to them. Or maybe it is because they have lost so much over the years as factories closed or moved overseas leaving them jobless and without the promised retirement fund they worked toward only to have it snatched away by giant corporations or Wall Street firms.

With a lack of empathy comes a sense of us versus them, Black versus white, gay versus straight, anti-choice versus choice when dealing with women’s bodies and on and on. These are serious divides that Donald Trump has no inclination of solving if he understands they exist at all. Sure unending war, climate change, the scourge of drugs, the exploding Republican deficit, poverty, and  a whole host of other issues are simmering on the back and front burners. But if America can not regain its empathetic foundation when dealing with our own, we will become more and more fractured as a society until our democracy becomes the ultimate victim.

One thing is clear: Trump over the past two years has become the emblem of exclusion and divisiveness. No president has played the race card and vilified those who he sees as less than patriotic, often based on the color of their skin, than Donald Trump. Additionally, the idea that Trump following is a working class phenomenon has been debunked since those heady days of the campaign when “Lock her up” and the attacks on the wicked media were his stock and trade supposedly aimed at the angry, white working class voters.

Then there is this.

It’s time to bust the myth: Most Trump voters were not working class.

When journalists wrote that Trump was appealing to working-class voters, they didn’t really know whether Trump voters were construction workers or CEOs.

Moreover, according to what is arguably the next-best measure of class, household income, Trump supporters didn’t look overwhelmingly “working class” during the primaries. To the contrary, many polls showed that Trump supporters were mostly affluent Republicans. For example, a March 2016 NBC survey that we analyzed showed that only a third of Trump supporters had household incomes at or below the national median of about $50,000. Another third made $50,000 to $100,000, and another third made $100,000 or more and that was true even when we limited the analysis to only non-Hispanic whites. If being working class means being in the bottom half of the income distribution, the vast majority of Trump supporters during the primaries were not working class.

The article goes on to say the same can be said about education. While a significant number of Trump followers didn’t have college degrees, the numbers show . . .

Trump seemed to have about as many people without college degrees in his camp as we would expect any successful Republican candidate to have.

So, what is the motivation behind the solid 33 percent Trump base that seem enthralled with the Orange One in such a tunnel vision manner?  If economic uncertainty is not the motivation or lack of education, what drives these people into a rabid, frothing at the mouth hysterical devotion to a man who obviously cares little for anything that does not underscore his “greatness”?
Trump Voters Driven by Fear of Losing Status, Not Economic Anxiety, Study Finds

A study published on Monday in the Proceedings of the National Academy of Sciences questions that explanation, the latest to suggest that Trump voters weren’t driven by anger over the past, but rather fear of what may come. White, Christian and male voters, the study suggests, turned to Mr. Trump because they felt their status was at risk.

“It’s much more of a symbolic threat that people feel,’’ said Diana C. Mutz, the author of the study and a political science and communications professor at the University of Pennsylvania, where she directs the Institute for the Study of Citizens and Politics. “It’s not a threat to their own economic well-being; it’s a threat to their group’s dominance in our country over all.”

The study is not the first to cast doubt on the prevailing economic anxiety theory. Last year, a Public Religion Research Institute survey of more than 3,000 people also found that Mr. Trump’s appeal could better be explained by a fear of cultural displacement.

So, there it is in a nutshell. The root of Trump’s less than sane approach to politics can be found in “white privilege”, not disenchanted middle-class workers. The problem with white privilege is that it is found in state after state. And since we know it isn’t a working class uprising per se, but a wealthy, frightened voting bloc two parts racist; one part disenchantment of the wealthy; and a heaping helping of red neck nihilism . Trump isn’t heroically standing up against white privilege, he is its poster boy.